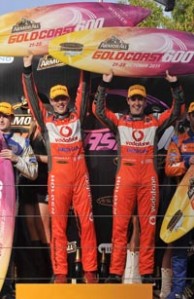 Sebastien Bourdais, left, has a two-year deal to drive with TeamVodafone at the Armor All Gold Coast 600

In response to questions about the future of Armor All Gold Coast 600’s two-driver format, V8 Supercars chairman Tony Cochrane said that drivers returning to the twin-driver Gold Coast race would be accepted, but only if they compete for a different team.

“I think it’s a bunch of baloney,” Dane told Speedcafe.com.

“I don’t know who dreamt up the rule. I have a suspicion it wasn’t Tony. Whoever dreamt it up needs to put it back outside of daylight where it first came from.

“We’ve got a two-year deal with our drivers, subject to whether we have a calendar clash and if the event remains a two-driver race.

“This rule sounds like WWF. If they want us to play under WWF rules, then they need to go get some other teams.”

Dane says that Priaulx has already ruled himself out of next year’s event due to a clash with his DTM schedule.

Regardless, Dane says that his deals should not be hindered by any rule changes.

“The rule is highly restrictive, but more to the point, we have contractual obligations in place anyway. We’re forging relationships with drivers and sponsors over a period of time,” he said.

“Before Sebastien signed for us, he wanted to know that, subject to calendar clashes, that he would be able to get two years with our team.

“Bare in mind, they don’t earn much money from this gig. Those guys just want some certainty about their drive.

“To be honest, if you spoke to Sebastien about some rule that has come out of somebody’s backside, it would probably mean that he wouldn’t come.”

While Dane was fuming about the possible rule change, he says that he loves the current two-driver international format and wants to see it retained.

“If we’re sensible about it and don’t screw up the presentation of the event, we have 28 ambassadors who go and preach the word of V8 Supercars, but more particularly Queensland and the Gold Coast.

“You couldn’t ask for better ambassadors.

“I had an email from Andy this morning acknowledging the release from the second year of his deal, and he said that it is with regret that he can’t come because his family love coming to Australia.

“From the point of view of representing V8s, Queensland and the Gold Coast, you couldn’t ask for a better way of getting that message out there.”