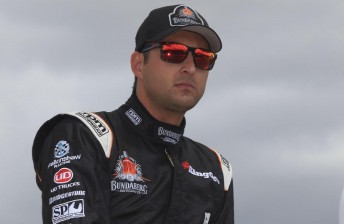 Fabian Coulthard believes he has earned his place as a full-time V8 Supercars driver.

The Bundaberg Racing driver, currently 14th in the V8 Championship, is on the verge of being moved out of Walkinshaw Racing at the end of the year, replaced by Russell Ingall who is tipped to join the three-car team in 2012.

To keep him in a full-time Holden seat, the fast Kiwi is being mentioned as a Brad Jones Racing driver next year.

Coulthard maintains that he has a valid driving agreement with Walkinshaw Racing, but is unsure of his 2012 plans.

He says that he is confident that he is still worthy of a full-time drive.

“I’d rather be driving than just being a co-driver,” Coulthard told Speedcafe.com.

“I don’t want to sound big headed, but I feel like I’m better than just a co-driver.

“But look, the guys obviously have a belief in me. That’s why I’m here and I have a contract.

“Who knows what’s going to happen – we’ll just play each day as it comes.

“I’m yet to be told one way what’s going to happen, but my first and foremost thing is to stay at the team. Multiple Bathurst winners, multiple championship winners – I have no reason to want to go anywhere else.”