Rogers weights up youth vs experience

Rogers weights up youth vs experience 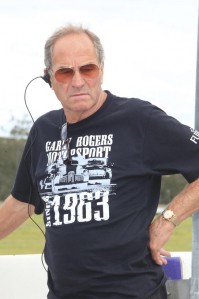 Garry Rogers says that he remains undecided on his replacement for Lee Holdsworth.

Holdsworth will announce today that he is leaving Garry Rogers Motorsport, bound for Stone Brothers Racing.

Rogers has a history of nurturing young driver talent, having given the likes of Steven Richards, Garth Tander, Jason Bargwanna, Dean Canto, Holdsworth and Michael Caruso their first opportunities in the sport.

Will he stick to his youth policy or take on an experienced campaigner?

In terms of experience, Rogers could take on a proven driver like Alex Davison, but if he looks to a rising star, he could have the choice of any driver from the Fujitsu V8 Series.

“Whether we go the young way or the old way or the middle way, I honestly don’t know,” Rogers told Speedcafe.com.

“The category is extremely competitive, but that’s not to say that you can’t get a young bloke up to speed reasonably quickly.

“These days, the amenities you have are much more user friendly than they were when we were starting younger drivers all those years ago.”

Rogers says that he will not be rushed into a decision or announcement.

“We’re certainly in no rush, but we would really like to tidy it up when the time is right,” Rogers told Speedcafe.com.

“I don’t have a time frame, other than it has to be done before the first week of March.”