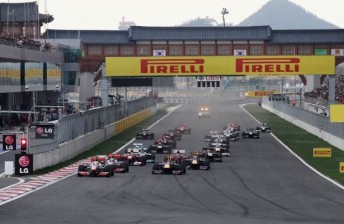 The Formula One field in Korea two weeks ago

Investors and government officials have confirmed that a Formula One Grand Prix will be held on the streets of New Jersey in 2013.

The race is set to take place on a 5.1km, Herman Tilke designed, waterside circuit, and will be officially referred to as the Formula One Grand Prix of America.

New Jersey governor Chris Christie, mayors Richard Turner (of Weehawken) and Felix Roque (of West New York) and investor Leo Hindery Jr were all on hand for the announcement, made on the circuit’s proposed start-finish line.

“I’m pleased that New Jersey will play host to Formula 1 beginning 2013, bringing one of the world’s most popular and exciting sports right to our backyard,” said Christie.

“I can assure Formula 1 that this is one of the wisest decisions you have ever made, to come and hold this event in New Jersey”.

The news means that two Formula One races are expected to take place in the United States in 2013, with the under construction Circuit of the Americas in Texas already announcing that it will host the US Grand Prix.

While funding for the Texas race is a mix of private investment and government backing, the New Jersey race will be funded entirely by Hindery and a group of unnamed investors.

“From the start we’ve said that we’d pay for the privilege, without public expenditure,” said Hindery, who is currently a managing partner of private equity firm InterMedia Partners, having previously founded the United States’ biggest sports television network, YES.

With Bernie Ecclestone and the FIA having already signed off on the race, final government approval is expected to see New Jersey slotted into the 2013 Formula One schedule in June, a week after the Canadian Grand Prix.