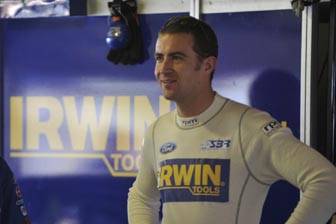 Alex Davison has spoken on his disappointment of not being retained by the Stone Brothers Racing team for next year.

Lee Holdsworth has been announced today’s as Davison’s replacement, effective in 2012 for three years.

After three mixed seasons with the Ford outfit, Davison is in the midst of his best season with SBR, currently running eighth.

Davison, 31, was disappointed with today’s announcement

“I am obviously extremely disappointed with Ross and Jimmy’s decision,” said Davison.

“I am in the top 10 in the championship and believe I have done enough to be in the V8 Supercars championship. My hunt for a new drive is well and truly on.

“I have to thank IRWIN for its support and friendship and want to ensure them that we will be doing everything we can to win every race remaining in 2011 – nothing has changed in that regard.”

Holdsworth will drive for the next two seasons with IRWIN Tools backing.

IRWIN recently announced a two-year contract extension with SBR, and the company’s Asia Pacific Vice-President, Nick Pritchard, wished Davison all the best for the future.

“We would like to sincerely thank Alex for all his efforts on and off the track for IRWIN Tools in the last three years,” said Pritchard.

“He is an outstanding person who we have built a strong relationship with.

“He is a very good driver and has been a great ambassador for our business, and friend. We wish him nothing but the best for the coming years of his career and will be following him closely.

“We respect SBR’s decision on their driver change and look forward to working with Lee for at least the next couple of seasons.”

See below for more on Davison’s future.