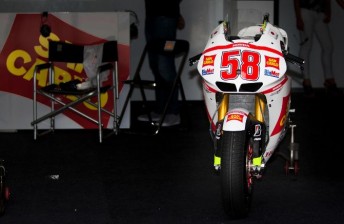 Simoncelli had joined Gresini upon stepping up to the premier class last year.

“The only certainty is that my team won’t participate in the upcoming Valencia Grand Prix and in the tests programmed after the race,” said Gresini.

“The day after (such a tragedy) you suffer even more. Everything happened so fast, I’m lost for words. I know our job is dangerous, that risk is part of the game, but you always hope nothing happens.

“When it does happen and you find yourself in the middle of it everything changes, it’s difficult to accept it.”

Gresini described his team as merely an ‘instrument’ for Simoncelli’s talent.

“I have many images from these two years spent together resurfacing inside my mind. Marco was spontaneous, he would always do what he thought, with a great heart and always radiant. I can’t remember him getting angry even once.

“He was always honest with himself and with the others, a guy who loved challenges, and we, his team, were just an instrument to realize his dreams and to unleash his passion.”

Prior to Simoncelli’s accident, a rider had not been killed in MotoGP since 2003, when Daijiro Kato, also a Gresini rider, lost his life at Suzuka.