Simon Evans back for ARC final

Simon Evans back for ARC final 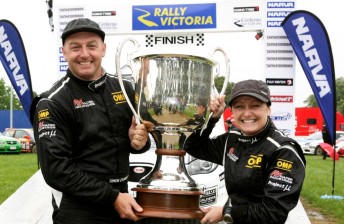 The five time Australian Rally Champions have not competed in any ARC events in 2011 and Sue Evans had announced her retirement from the sport to concentrate on family and business.

The lure of contesting the only Australian Championship Round that they have not won was too good an opportunity to pass up.

In 2010 at the inaugural running of Rally Victoria the potent “Tankformers” WRX suffered a rare mechanical problem that sent them off the road and stranded on Friday’s second stage. Starting again on the Saturday, in typical Evans style, the team went out and was fastest on all but 1 stage.

“To me it is unfinished business,” said Simon Evans.

“I really want to win this Rally!”

The addition will provide a major profile lift for the final round of the ARC with Queenslander Ryan Smart (Toyota Corolla) and Victorian Justin Dowel (Mitsubishi Lancer) also in the mix in their “unrestricted” vehicles.

The event is set to descend on Baw Baw Shire on the 11th and 12th of November starting off from Lardner Park.