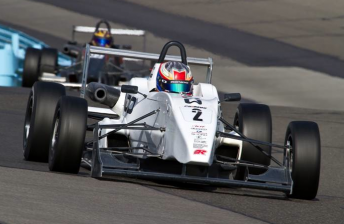 Australian international driver Nathan Morcom is putting a disappointing F2000 Championship Series behind him and focusing on 2012.

Having completed a part campaign in the American junior formula, Morcom had high aspirations after winning his first race in the championship.

Things went down hill for him from there. At last weekend’s round at Watkins Glen, he switched makes of chassis, but remained off the pace while his crew worked through its issues with the new machine.

An engine problem during the first practice session put the Rondo entry out of action until the Saturday morning qualifying session where he didn’t set a lap time and started the race last.

In Race 2, Morcom progressed steadily through the midfielders until he spun off the track avoiding a four-car melee.

The engine stalled and wouldn’t restart, leaving him stranded.

As a result, Morcom finished seventh in the F2000 Championship Series pointscore and was the fourth-placed rookie.

The series was won by Canadian Remy Audette, driving a Van Diemen.

Morcom is now focussing on improving his position for next year.

“Obviously it’s been a disappointing series, apart from winning the first race,” he said.

“But you can’t do anything about things that are outside your control.

“The positives are that I’ve learned a lot about racing in the USA, which is different in a lot of ways from Australia.

“And I’ve driven on some of the best road circuits in the country, which is good experience for the future.