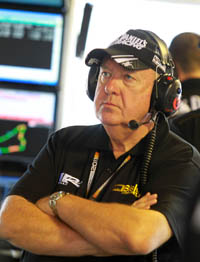 Kelly Racing has secured the services of Tony Dowe in an engineering consultancy role.

Dowe is the former Managing Director of TWR’s United States arm, which operated the successful Jaguar sportscar program in the late 1980s and early 1990s, winning both the Daytona and Le Mans 24 Hour events.

Kelly Racing is one of the largest V8 Supercars teams, fielding four cars with close to 50 full-time staff.

To ensure the Kellys get the most out of their wide range of engineers and mechanics, Dowe says that the Kellys approached him to help them get maximum value and efficiency from all team members.

“What they were looking for was an outside independent view, without an agenda,” Dowe told Speedcafe.com.

“That is some of what I do in America for factories that want a view of how their teams are doing and what they need to prop them up a bit.

“The Kellys and I have got on pretty good so far, so I’ll be overseeing the running the team.”

Dowe says that with the rapid increase in competition in V8 Supercars has forced teams to act smarter.

“Anyone can spend gazzillions and go racing, but the art is to win for the least amount of money,” Dowe says.

“Lean and mean isn’t a bad way of going racing, because it highlights what you need to get done.”

To add to Dowe’s impressive credentials, he also has experience in Formula One with Ensign, Brabham, Wolf, Ligier and Arrows, IndyCar with Chaparral and Newman-Haas, Sportscar racing with Haas, TWR Inc (Jaguar), Panoz, Dick Barbour Racing and Tafel Racing, MotoGP with Kenny Roberts Racing and has served as a representative on the FIA’s sportscar technical working group.