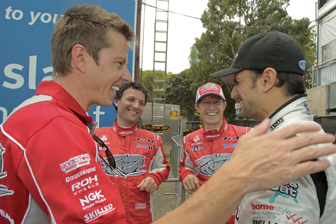 Returning international drivers competing at the Armor All Gold Coast 600 may be forced to switch teams year to year.

In a bid to keep the format and field fresh, V8 Supercars chairman Tony Cochrane has outlined a plan to try and attract as many new faces as possible to the popular Surfers Paradise street race.

The V8 chief says that drivers returning to the twin-driver Gold Coast race may be accepted, but only if they compete for a different team.

“My attitude is that this race is here forever, but we are going to have to change some rules,” Cochrane said.

“The one thing that the government want is new names popping up, and we accept that. We can’t have the situation where one driver stays in the same team for six years. That would defeat the purpose of the whole thing.

“We’ll have to introduce rules about how many times a person can race for a single team. We’ll refine it as we go along.

One situation that may force new international drivers into V8 seats is the date clash between the 2012 Gold Coast race and Petit Le Mans. As outlined on Speedcafe.com yesterday, 14 of V8’s overseas guests raced at the sportscar race last year. CLICK HERE for more.

Cochrane was pleased with the depth of international driving talent that competed on the weekend, but says that there is room for improvement. All 56 V8 drivers together assembled before racing commenced on Saturday

With two years of the format under V8’s belt, nine drivers returned from the inaugural race in 2010. Six of those remained in the same team.

He suggests that one way to take the event to the next level would be to have NASCAR stars available for the weekend.

“When you read their CVs, the driver line-up was extraordinary. It’s outstanding,” Cochrane said.

“Going forward, there are a number of motorsport stars who we haven’t had out here yet.

“One of my crazy, left of field ideas is that I wouldn’t mind moving this event to the last round of the year so that we could allow NASCAR drivers to do it, allowing four or five NASCAR stars into the field.

“There’s all sorts of ideas that we’ll think about in the next couple of years on how we can expand and develop it and make it better. No idea is a bad idea.”

Cochrane says that bigger, higher-profile names competing would be great, but not essential.

“Can we improve the international field? Probably, but I don’t think we can improve it greatly, because I think it’s already pretty damn good,” he said.

“Obviously, there are some pretty good names out there who really want a drive in it. If we can make it on a date where they can, then we will.”