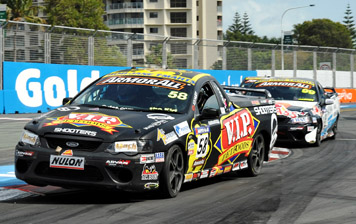 Auto One V8 Utes Series front-runner Ryal Harris says that winning races will be the only way to take this year’s title.

The eight point gap, though, might be extended to 18 if an appeal against a Race 2 accident is turned down.

Harris dominated proceedings at the Armor All Gold Coast 600 last weekend, narrowing the title gap to Pither and ensuring the final two rounds at Sandown and Sydney will be closely fought.

After qualifying on pole and taking all three wins – including the reverse grid heat, Harris says that his success on the Surfers streets has put him on the front foot – but he’ll need to keep winning.

“Taking maximum points is always my goal, but it’s so hard to do it in V8 Utes with the second race reverse grid,” Harris said.

“But we’re on a roll now. It’s a great feeling when you can run at the front in every qualifying session and every race.

“We need to keep the momentum going at Sandown and Homebush to have a chance of winning the series, though. Chris has been incredibly consistent as well as quick, so unless he has a bad round it will be a struggle to overcome our zero result in the second race at Townsville.”

The next event on the V8 Utes calendar is at Sandown International Raceway on November 18-20.

See below for V8 Utes points after six of eight rounds.