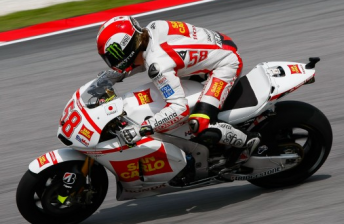 Australian motorcycle champion Wayne Gardner has labelled the incident that took the life of Marco Simoncelli as “freakish.”

The Italian rider lost control of the front of his Gresini Honda in Sunday’s Malaysian Grand Prix before being collected by rival riders Colin Edwards and Valentino Rossi.

The collision ripped the helmet off Simoncelli’s head, killing him instantly.

Gardner, winner of the 1987 world motorcycle championship, described the incident as “freakish.”

“The accident that claimed Marco’s life was freakish in the extreme,” Gardner wrote on his personal website.

“I’ve never seen anything like it in all my years associated with racing.

“The start of the incident isn’t entirely clear as it happened off camera. All we saw was his bike veering violently to the right and into the path of Colin and Vale. I think he must have initially lost the front, only to have the tyres somehow grip again and launch him straight across the track.”

Gardner was involved in a similar incident many years ago when he hit a standard Franco Uncini. He says that Edwards and Rossi should not blame themselves for the fatal crash.

“Having been involved in a similar incident with Franco Uncini many, many years ago, I have a pretty good idea about how they’ll be feeling,” Gardner wrote.

“But it simply wasn’t their fault. There’s nothing they could have done. Both will be replaying the event in their mind over and over again, wondering if they could have veered to the left, the right, braked harder.

“But while a small consolation, the TV footage of the accident – now and in the years to come – will show them they had absolutely no time to avoid the collision. It was, sadly, just a case of being in the wrong place at the wrong time.”