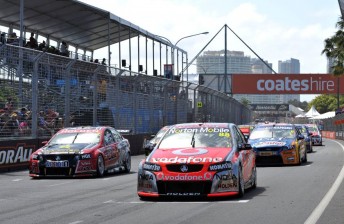 The V8 Supercars field on the Gold Coast

V8 Supercars is cooking up a special format for V8 Supercars’ inaugural visit to America in 2013.

Bouyed by the success of the international co-driver event at the Armor All Gold Coast 600 last weekend, V8 Supercars chairman Tony Cochrane says that the idea of replicating the Surfers Paradise format has been tabled, although there are other options, including running additional wildcard entries.

“People have speculated about the format for Texas, but we’ll look at all types of formats,” Cochrane told Speedcafe.com.

“We’ll look at having American co-drivers, and there’s other suggestions as well.

Cochrane says that Texas officials will play a huge role in the format that is selected.

“You have to remember, they are paying the bills, so they have a big say in what they want to see on their circuit,” Cochrane said.

“We’ll sit down with them in March/April next year, we’ll know the exact date and then we’ll commit to a format, whatever that may be.”

“I strongly suggest that they do that,” Waltrip told Speedcafe.com regarding the format for the 2013 V8 event at Austin, Texas.

“If they could get some of the NASAR boys to come down and drive with some of the V8 Supercars drivers – that would add a nice flavour to the race. It would give the hometown folks something to cheer for.