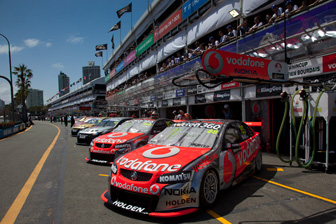 Hong Kong is being targeted as a street race venue for V8 Supercars in 2013.

The FIA’s Asian Zone representative Wesley Wan was a guest of V8 Supercars at the weekend’s Armor All Gold Coast 600, and told Speedcafe.com that negotiations are underway to build a street track for V8s to race on in Hong Kong.

“In two years time, we’d like to bring V8 Supercars to Hong Kong on a street circuit. We will propose a new circuit, hopefully for 2013,” Wan told Speedcafe.com.

“The V8s are very interested in coming to Hong Kong, and we are welcome to have some international series in Hong Kong.

“We did the Red Bull demonstration there this year, and it got a good response. This has opened the door to motor sports in Hong Kong. They used to be against motorsport.” The move to Hong Kong would be one more overseas race to add to V8’s expanding calendar. The category has a long held desire to run 18 events by 2014 – with up to six of those events hoped to be run offshore.

Austin, Texas’ new track has already been confirmed for 2013, while other new locations mooted in recent times include the Phillipines, India, Indonesia and a switch to a new airport race in New Zealand.

Whitaker says that a Hong Kong street race is framing as a genuine chance, but reiterated that new international races will not affect the amount of domestic events.

“There’s been a lot of talk about Hong Kong looking at running a street circuit.

“But I’ll add, not to the detriment of the championship. We want to make sure were honouring our core fan base, but at the same time, we have the opportunity to seek more overseas races.”