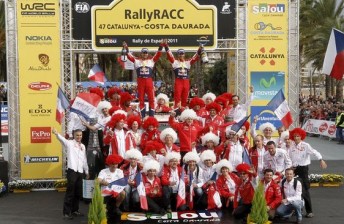 Loeb celebrates another win with Citroen

Sebastien Loeb has taken his seventh win on Rally Spain to eek out a slender points advantage over title rival Mikko Hirvonen heading into the title decider in Wales.

The Frenchman ended the rally 2:05.39s ahead of Hirvonen, who assumed second place from team-mate Jari-Matti Latvala under team orders.

With Loeb taking a bonus point for setting the third fastest time on the rally-ending Power Stage, the seven-time reigning champion now holds an eight point lead over Hirvonen.

“It was a really good rally for us coming from three bad rallies,” said Loeb.

“We did the perfect race I would say with no mistakes. Mikko has taken a lot of points so we stay very close in the championship but the point for the Power Stage could be very important.”

Mini duo Dani Sordo and Kris Meeke finished fourth and fifth respectively, with the Englishman trumping the Spaniard to take the three points on the Power Stage.