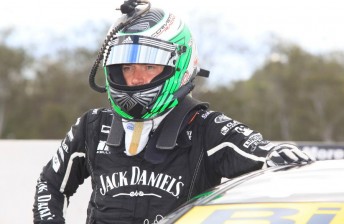 Richard Westbrook performed strongly alongside Tod Kelly at the GC600

The grid for the Supercheap Auto Bathurst 1000 could take on a multinational flavour next season, with a range of co-drivers from the weekend’s Armor All Gold Coast 600 eyeing off a start in The Great Race.

While V8 Supercars rules state that co-drivers for the Gold Coast race cannot compete in either the Sandown 500 or Bathurst 1000, a date clash between the Surfers Paradise street race and America’s Petit Le Mans may see several drivers turn their attention to the traditional endurance races.

CLICK HERE for Speedcafe.com’s story on the 2012 schedule clash.

A key candidate for a Bathurst start is American Porsche racer Patrick Long. The American Le Mans Series regular has starred in both of the Gold Coast events run to the international format, and is understood to have received two serious offers to drive in the 2011 endurance races – both of which were turned down due to a date clash.

“I’ve made no secret that my goal is to take part in the enduros in the future,” Long told Speedcafe.com at the weekend.

“Whether that’s next year or a few years down the road, it just depends when the opportunities might come.”

Long will not be able to begin seriously talking to teams about the Sandown and Bathurst races until the American Le Mans Series confirms the date of its ‘To Be Decided’ round for next year – currently slated for either September or October.

Long’s fellow ALMS regulars Jorg Bergmeister, Oliver Gavin and Marc Lieb all expressed their interest in the Bathurst 1000 to Speedcafe.com at the weekend, and are likely to be highly saught after by the V8 Supercars teams should they be available.

Lieb has actually been to Bathurst before – completing a lap of the track in a road car 10 years ago with friend Alex Davison.

“It would be a dream to do the endurance races in Australia,” Lieb told Speedcafe.com.

“It’s very similar to the Nurburgring Norschliefe. It’s a little shorter, but it has all the elevation changes. It’s a fantastic track.”

Meanwhile, Briton Richard Westbrook – who drove with Todd Kelly on the Gold Coast – is awaiting the release of the calendar for next year’s FIA GT1 World Championship before furthering his discussions with Kelly Racing for a seat in the 2012 enduros.

“I came here to learn the car to do the enduros next year,” Westbrook told Speedcafe.com of his Gold Coast 600 appearance.

“That was always the target, to do Bathurst and Sandown next year, and that remains the case.

“I’ve thoroughly enjoyed Surfers Paradise, and it’s such a shame that it clashes with the Petit Le Mans next year, but doing the enduros next year was always the target.”

While yet to lock in his deals, Westbrook is expecting to his 2011 commitments with Sumo Power Nissan in GT1 and Corvette Racing in the ALMS’s three-driver races.