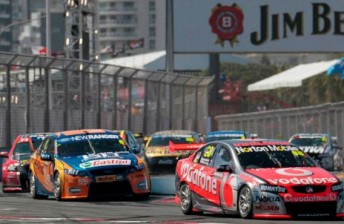 The V8 Supercars teams will have their work cut out to secure co-drivers for next year’s Armor All Gold Coast 600 as a series of date clashes threatens to undermine the international component of the event.

The timing of the ALMS/WEC round, dubbed the Petit Le Mans, is set to have a particularly large impact on the Gold Coast 600, with 14 drivers that competed in the V8 Supercars event at the weekend having also raced at Road America this year.

While Speedcafe.com spoke to several drivers at Surfers Paradise who were eager to see the conflict avoided, V8 Supercars’ acting CEO Shane Howard confirmed that the announced date for the Gold Coast race is non-negotiable.

“Our dates are locked in with the Queensland Government. It’s the right time to hold this event, for this city.

“It’s always unfortunate that there’s a clash with another championship, but it’s a fact of life.”

Howard strongly denied however that the overlapping calendars will hurt the category’s internationally flavoured event.

“We could have had 60 international drivers be involved this year – we are well over subscribed with very, very capable drivers,” said Howard.

“We understand that there are clashes, but we won’t have any trouble fielding 28 seats with world quality drivers at this event, I can guarantee it.”

In addition to the unavailability of drivers, running the Petit Le Mans and Gold Coast 600 events on the same weekend is likely to hurt television audience numbers for the V8 Supercars in the United States if the 2011 deal to broadcast the Surfers race live on Speed is repeated.

Encouragingly for V8 Supercars, the previously announced 2012 Formula One World Championship and IndyCar Series calendars contain no races on the October 19-21 weekend.