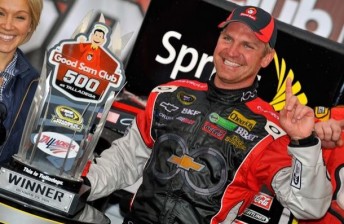 In typical Talladega fashion, Bowyer edged Burton to the line by just 0..018s, having pushed his team-mate clear of the pack before making his winning move in the tri-oval on the final tour.

“He (Burton) kind of moved up off of Turn 4, and I knew it was too early to go, but it was going to be a drag race, and it would give us both a shot at it,” said Bowyer.

“He worked so well with me all day long. You hate that it comes down to that, but it is what it is, and you owe it to your team and your sponsors to go out and win the race.”

Australian Marcos Ambrose finished in 19th position. The #9 Ford Fusion ran near the front throughout the race, but after receiving damage in a late race incident, the former V8 Supercars Champion had to fight his way back from 28th to 19th on the last two laps of green flag racing.

“Man that was tough,” said Ambrose of the race.

“I am disappointed with the result but with everything that was going on out there and with as much stuff as happened, I am pretty thankful that we were just able to cross the finish line at the end.”