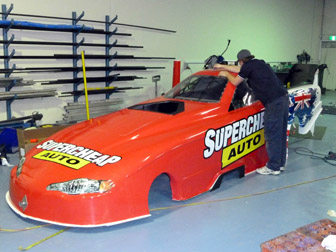 The Russo’s Supercheap Auto Funny Car will use a Chevrolet Monte Carlo body and is the first nitro race car built in Australia to NHRA’s modern day SFI specifications.

“Murray Anderson has built a world class chassis and we are so proud and excited about bringing it to America to race in the NHRA Full Throttle Drag Racing Series,” Helen Russo said.

Still living and working at home, the Russos travelled to and from the US a number of times over the next eight years, racing periodically due to budget constraints.

While not yet having qualified for an NHRA event, they were the first Australian nitro team to win a US event when they won the 2000 AHRA World Finals in Spokane, Washington.

A change in NHRA chassis specifications saw the Russos ship their operation home in 2008 to regroup, but with limited upcoming racing opportunities for Funny Cars the couple recently made a decision to return to America.

They commissioned long-time friend and crew member Anderson to construct a new, NHRA-legal chassis, the car completed in late August and arriving stateside three weeks ago.

In addition to a new race car, the Russos have invested heavily in their return to the US by setting up a permanent base in Colton, just outside Los Angeles, as well as securing a new transporter that includes a motorhome.

“Our return to the US has been 30 years in the making for Peter and me. We are better prepared than ever before, so we are thankful to Murray Anderson, our crew and sponsors for their help and input in making this happen,” Helen Russo said.

Their limited 2011 campaign, which will include the season ending AAA So-Cal World Finals at Pomona in two weeks (10-13 November), is being backed by leading Australian retail chain Supercheap Auto as a carryover of its planned Australian sponsorship, thwarted by rainouts last summer.