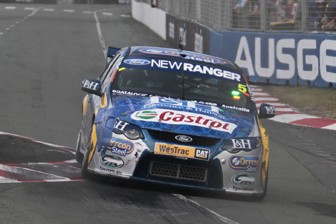 Mark Winterbottom and Richard Lyons have taken Ford Performance Racing’s first win of the 2011 V8 Supercars Championship at the Armor All Gold Coast 600.

The issue of kerb hopping dominated the race, with the new-for-this-weekend bollard and sensor combination proving highly controversial.

Several cars received drive-through penalties in the first stint of the race, prior to the electronic sensors being turned off.

With teams and drivers unsure of the change, confusion reigned as drivers began almost straight-lining the Turn 1/2/3 and 6/7/8/9/10 chicanes.

In a repeat of yesterday’s race, Sebastien Bourdais led away from pole position, and was not headed for the duration of his stint.

A tremendous start from fifth on the grid saw Andy Priaulx jump to second at the first corner, with the Briton dropping just 2.6s to Bourdais before the Frenchman pitted when the driver-change window opened on Lap 34.

Priaulx headed to the pits to be replaced by Whincup just one lap later, with the team deciding to short-fuel the #888 car to return Craig Lowndes to the track marginally in-front.

Whincup was soon back ahead thanks to a bold move at Turn 12 on Lowndes’ out-lap, while Winterbottom was a full 20s behind the squabbling Vodafone entries by the time the Safety Car appeared for debris on Lap 44.

While the leading contenders did not pit under the yellow, Mika Salo brought the Trading Post FPR Falcon into the pits to hand over to Will Davison. The Finn had endured a left-front puncture while running in fourth position on Lap 32 – two circuits shy of his minimum required distance.

Whincup continued to hold Lowndes and Winterbottom at bay after the restart, with strong opening stints from their respective co-drivers seeing Greg Murphy, Lee Holdsworth and Alex Davison filling the remainder of the top six.

The front-runners used the race’s second Safety Car on Lap 54 to make their second and final stops, with Lowndes the big loser (falling to 12th place) having been forced to que behind team-mate Whincup.

The five-time Bathurst 1000 winner struggled for speed during the remainder of the race and would eventually finish 20th, thanks in part to a third pitstop for tyres with less than 15 laps remaining.

Jason Bargwanna and Will Davison assumed the top two spots having decided not to pit under the Safety Car, but would find themselves well outside the top 10 by the time they made their final stops on Laps 84 and 87 respectively.

The third stint of the race was all about the battle between Whincup and Winterbottom, with the Ford driver taking more liberties with the kerbing than his rival as he looked for a way by.

Despite encouragement from engineer Mark Dutton to use more kerb on the backstraight chicane, Whincup finally succumbed to the speed of his rival at Turn 11 on Lap 94.

Holdsworth and Murphy fought a similarly spirited battle for third, with the Fujitsu and Pepsi Max backed Commodore trading positions several times over the final 50 laps.

Rick Kelly and Jorg Bergmeister stayed out of trouble to take fifth in the Jack Daniel’s Commodore, while James Courtney had to be content with sixth after co-driver Darren Turner received a contentious kerb hopping drive-through towards the end of his stint.

Team BOC’s day ended thanks to an unfortunate incident with the WesTrac Falcon at Turn 12 – Gianni Morbidelli making head-on contact with the #8 Commodore while looking for a place to turn around following a spin.

The hardest luck story of all belonged to The Bottle-O Racing, which saw its international star Christian Klien make heavy contact with the outside wall at the back chicane following a touch from Jan Magnussen on the opening lap.

Front-row starters Ryan Briscoe and Garth Tander also had a difficult run, with the Toll HRT Commodore breaking an axle during the IndyCar driver’s opening stint. With the offending axle replaced, the pair finished the race 20 laps down in 23rd position.

The V8 Supercars Championship continues at three weeks time at the Symmons Plains circuit in Tasmania.