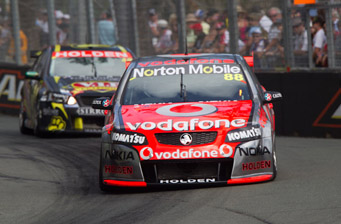 Jamie Whincup has taken pole position for Race 22 of the V8 Supercars Championship on the Gold Coast.

The TeamVodafone driver will collect a total of $20,000 from pole position and event sponsor Armor All courtesy of topping both today’s qualifying session and yesterday’s Top 10 Shootout.

With co-driver Sebastien Bourdais again set to start the 300km race, Whincup emphasised the extra incentive to jump from fifth to first on his final lap.

“That’s one of the best sessions of the year to go out there through the concrete canyon,” said Whincup.

“We had a good car and I feel that I extracted the most out of it.

“All I was thinking about is that I didn’t want Seb back in fifth position, I wanted him up the front to start the race.”

Tander had topped the sheets for the majority of the session, twice improving his time during the final 15 minutes before failing to improve by just 0.05s on his final run.

Mark Winterbottom ended the session third, despite shooting briefly ahead of Tander with three minutes to run, while team-mate Will Davison was forced to settle for fourth when he overshot the first chicane on his last attempt.

Kerb hopping was again the talk of the session, with the troublesome Turn 2 bollard lasting less than 15 minutes. V8 Supercars and key team personnel will holding a meeting after the session in order to discuss the on-going issue.

Race 22 of the V8 Supercars Championship will get underway at 1340 local time.