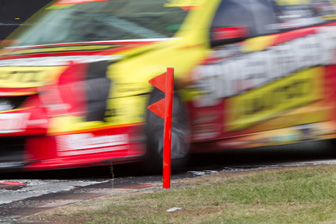 TeamVodafone boss Roland Dane is furious over the kerb hopping issue that plagued today’s V8 Supercars race at the Armor All Gold Coast 600.

The category’s new system for policing the over-use of kerbs, which utilises a combination of electronic sensors and plastic bollards, failed dramatically during the final race of the weekend.

While the bollards (installed as a visual aid for the drivers) were quickly destroyed by the passing cars, the sensors also appeared to malfunction, leading to Race Control turning off the system a third of the way through the race.

Although officials tried to keep tabs on drivers over-using kerbs, lap times began to decrease dramatically during the middle phase of the race as drivers became confident that they would not be penalised.

Underlining the extent of the corner-cutting, Will Davison reset the lap record on the final lap, scoring a blistering 1m10.0851s – a staggering 0.9s faster than Jamie Whincup’s pole position this morning.

Dane, who watched his Whincup/Sebastien Bourdais driven entry score second place behind Orrcon Steel FPR’s Mark Winterbottom/Richard Lyons, says he is disappointed with the way the situation was handled.

“It was very very disappointing that we started off the race with a system in place and then it was switched off after about a third of the race and we didn’t know where we stood,” Dane told Speedcafe.com.

“It was very very disappointing to see, I don’t know the ins and outs of what happened or what went on, but I’m very unimpressed.”

Dane was particularly displeased with the lack of policing that took place once the electronic system was abandoned.

“We didn’t know what circuit we were racing to,” said Dane.

“The problem, for me, is that if you had your cars on TV, you’re racing one track. If your cars were not on TV, you were racing to another one.

“It was crazy. When your car wasn’t on TV, we saw them doing fastest laps and quite extraordinary lap times which are based on using another circuit.”

Dane also claimed that his team was not informed by officials that the sensors had been switched off.

“We had absolutely no idea what was going on, so that made it very difficult,” Dane said.

“In the end, Jamie was just driving defensively trying to make sure he didn’t get pinged. Of course it was easier for the guy behind you to take a little bit more, Frosty (Mark Winterbottom) did that.

“Frosty is not a threat for the championship, so Jamie was always going to be a bit conservative there.”