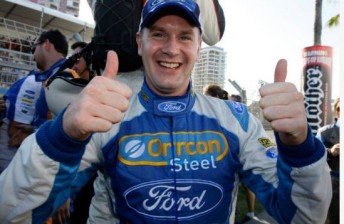 Irishman Richard Lyons has described winning Race 22 of the Armor All Gold Coast 600 as ‘unbelievable’, having not even had a drive in the event earlier this week.

Lyons was a late addition to the #5 Orrcon Steel FPR Falcon’s driver line-up following the back injury sustained by Will Power in the tragic accident that stopped the IndyCar season finale last weekend.

Having completed the recent V8 Supercars endurance races with Jonathon Webb’s Mother Energy backed team, the 31-year-old Lyons was well placed to step into the vacant ride alongside Mark Winterbottom.

“I just can’t believe how my week has turned around – it’s all happened so fast,” said Lyons, having also taken a third place finish on Saturday.

“It’s been a great opportunity with FPR, it’s a team I’ve wanted to work with for so long.

“To come and do it and to have a few hard times but I could see this week they were putting everything into this weekend and to come out on the other side with a win is fantastic. I’m really enjoying the moment with the guys.”

“It was a day on the phone – I spoke to quite a few drivers. When I spoke to Richard he was in Japan,  and he instantly said yes. A couple of others I spoke to were a bit shocked when I rang them and they dithered. If you snooze you lose!

“I’ve know Richard for many years. He almost drove for us in 2004 in the Jordan F1 car and we’ve stayed in touch since then.

“The opportunity had never come to drive one of our cars until this week. It was a late call for him. When he arrived he went straight for a seat fitting in the car.”

While currently based in Japan, Lyons is a previous Gold Coast resident – attending the Surfers Paradise Street Circuit several times as a spectator prior to his racing debut this weekend.

Lyons is in negotiations to return to the Japanese SuperGT category next year, having missed out on a ride for the 2011 season, but says he’s eager to find a full-time drive in the V8 Supercars Championship.

The three V8 Supercars co-driver races have been the former SuperGT and Formula Nippon champion’s only competitive outings this year.