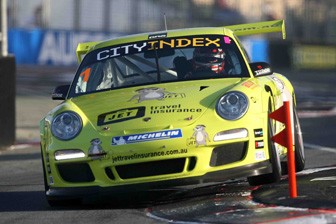 Craig Baird has completed a clean sweep of the Porsche City Index Carrera Cup races on the streets of Surfers Paradise, winning Races 2 and 3.

The Kiwi led every one of both race’s 12 laps to totally dominate the weekend.

The race was marred by an awkward incident between McElrea Racing team-mates Michael Patrizi and Jonny Reid. Patrizi had a tyre go flat at Turn 13, pitching him into a spin. Reid was left with nowhere to go and his car climbed over to of Patrizi’s.

In the 14 lap Race 2, Baird finished ahead of Richards, Gaunt, Matthew Coleman and Reid rounded out the top five.

Max Twigg was the first of the ‘Elite Class’ drivers home in sixth.

The final round of the 2011 Porsche City Index Carrera Cup will be held on the Olympic Park streets for the Sydney Telstra 500 in December.