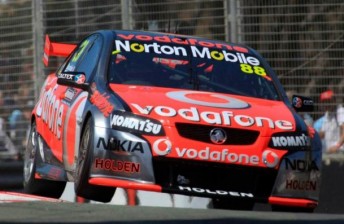 Whincup in the TeamVodafone Commodore

The TeamVodafone Commodore of Jamie Whincup and Sebastien Bourdais will start Race 21 of the V8 Supercars Championship from pole position.

Whincup was the eighth man out in the Top 10 Shootout, laying down a wild but fast 1:11.72s lap to eclipse the best effort of previous fastest man Will Davison (Trading Post FPR).

The two-time V8 Supercars Champion had his team on edge when he locked his right-front tyre heading into Turn 11 – running right up against the exit wall as a result.

“I think I scared myself and everyone in my garage,” said Whincup after the session.

“I locked the front, unlocked it and then locked it again. I thought we’ll see what happens, so I tipped it in and lucky she went around (the corner).

“The whole lap is a wild ride around here, especially with the chicanes and the bollards and what not.”

“I really freaked out when I saw the lock-up,” added Bourdais, who is expected to start car #88 in this afternoon’s race.

“I thought ‘oh, that’s not good news’, but he pulled it up. Obviously he’s done this a few times before, so I’m really happy.”

Courtney lost the baulk of his time in the first sector having missed the apex at the Turn 4.