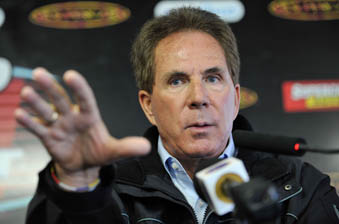 NASCAR Hall of Famer Darrell Waltrip says that the Gold Coast street track is even tougher than Bathurst.

After walking around the circuit and watching the V8s in practice yesterday, the former racer-turned-commentator says that Surfers Paradise circuit is even less forgiving than the Mount Panorama track.

“My source for information down here is Marcos Ambrose, so I said to him “The Mountain scared me half to death, how does the Gold Coast compare?” He said that this track is much harder. I can’t image how anything could be harder than Bathurst!” Waltrip told Speedcafe.com.

“It’s tighter, the car moves around a lot more, you’ve got to use the kerbs, there’s not a lot of room for mistakes.”

Waltrip is a fan of the Gold Coast 600 international driver concept, saying that it will help the American audience engage with the series.

“It’s really neat to see the international driver concept here. I like that,” he said.

“There are some people in this race now that are American breed that we recognise and know.

“There’s a good balance between the regular V8 drivers and the internationals. I think it’s going to make for a very interesting event.”

But will he be going for a passenger ride around the circuit, like he did at Bathurst two weeks ago?

“I don’t want to ever do that again.”

See below for vision of Waltrip’s famous hot lap with Bright at Bathurst.