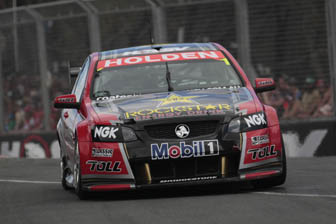 Garth Tander has taken provisional pole position for Race 21 of the Armor All Gold Coast 600 in a rain affected qualifying session in Surfers Paradise.

The Toll Holden Racing Team driver put down two quick laps early to sit at the top of the times when rain arrived after just eight minutes.

The weather saw all 28 cars return to the pits, and ensured no one could improve on their early times during the remaining 22 minutes.

The second TeamVodafone entry of Craig Lowndes/Andy Priaulx will start down in 15th position. A mechanical problem forced Lowndes to pit on his out-lap in the 30 minute session, hampering his ability to set a quick early time.

Mark Winterbottom, who set the pace in Practice 1 yesterday morning, was also badly affected by the onset of rain. The Orrcon Steel FPR Falcon will line-up 17th for this afternoon’s race.