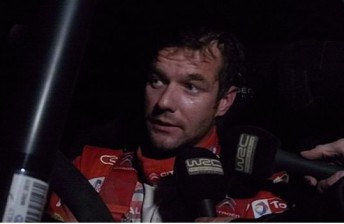 Citroen’s Sebastien Loeb will run first on the road for the second day of Rally de Espana after taking the lead from Jari-Matti Latvala on the final stage of Leg 1.

The Frenchman’s fortunes turned around in the afternoon however as the road sweeping effect allowed Latvala to overhaul him to hold a 16s lead heading into the night stage.

A spin and right-front puncture for the Ford driver would be the day’s final twist – handing Loeb a 30s advantage.

“Luckily I had a bit of dust on the first stage but in the afternoon the road has been really difficult and I should have lost much more time.”

Latvala’s team-mate Mikko Hirvonen sits a further 24s adrift in third, with the co-championship leader having been extra cautious while running in Loeb’s dust during the morning.

Second works Citroen driver Sebastien Ogier is a full 1:45.3s down on Loeb having suffered an early puncture, while the Minis of Dani Sordo and Kris Meeke sit sixth and seventh respectively.