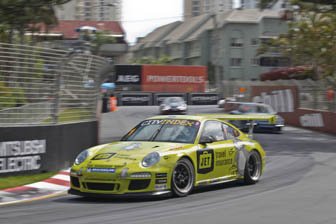 Craig Baird has taken victory in the opening race of Porsche City Index Carrera Cup Australia on the Gold Coast.

Baird, who started from pole position, led into the first corner and quickly pulled away from his rivals, eventually taking the race win and extending his championship lead in the all-Porsche category.

Behind Baird, Daniel Gaunt was unchallenged in second for much of the race until the final laps. Late in the race, Jonny Reid closed the gap to his countryman but was unable to pass Gaunt by the chequered flag.

Steven Richards, Ben Barker and Michael Patrizi were in a battle for fourth, fifth and sixth during the latter stages of the race. Richards eventually broke free from the pack and caught Reid and Gaunt, however he braked too late at Turn 9 and was forced down the escape road, dropping him down the order.

Patrizi therefore moved into fourth by the finish, ahead of Barker, Matthew Coleman and Richards, who recovered to place seventh.

Baird’s victory was his fourth race win in Carrera Cup on the Gold Coast, which extends his championship lead to 29 points ahead of Jonny Reid and Daniel Gaunt.

“It’s great to take the first win for the weekend on the Gold Coast,” said Baird.

“It doesn’t matter where it is, a win is always great. But it’s a bit more special at your home event.”

“I’m hopeful for more of the same for the two Carrera Cup races on Sunday and hope to extend the championship lead.”

Koundouris’s race was made easier after Elite Class points leader Max Twigg failed to line up for the start after breaking a drive shaft on the warm up lap.

“I’m really happy to get my first Elite Class win for the year,” said Koundouris.

“Anything can happen in the Gold Coast and with one mistake you can end up into a wall and your race is over, so it was great to finish in one piece and in front.”

Porsche City Index Carrera Cup Australia has two races remaining for the weekend, both to be held on Sunday October 23.