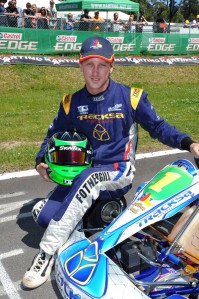 After several years away from helping young drivers to further their careers, Eastern Creek Karts boss Garry Holt will once again assist a karting champion to further his career.

Holt’s Eastern Creek Karts business will be backing 2010 CIK Stars of Karting Series Champion Cian Fothergill in his campaign at next month’s Asia Pacific KF2 Championship at Suzuka in Japan.

For Holt, who has assisted a number of young stars during their formative years including James Courtney and Troy Hunt, he believes Fothergill is a great ambassador for Australian karting and has significant potential to become a real star of the future.

“It has been a long time since I have supported a young driver coming through the karting ranks, after speaking with Peter Galvin about Cian I’m very confident of his ability to perform well overseas,” said Holt.

“Karting and motorsport in general is something that I have a passion for, and to be able to help an extremely good talent like Cian has excited me once again.”

With the support of Holt and Eastern Creek Karts Fothergill believes that he is fully prepared for a realistic shot at victory in the event, which will be contested alongside the final round of the World Karting Championship.

“To compete in Japan is something that I’ve been looking forward to for almost 12 months now. Unfortunately, the devastating earthquake earlier in the year meant that it was delayed by a few months and I’m really excited about competing overseas,” said Fothergill, who will line-up for the Kosmic Racing Team in the event.

“It will be the first time that I’ve competed overseas, and with the Asia-Pacific Championship being held alongside the World Championship, all of the big factory teams will be there so I’m keen to make a big impression.

“Along with the support gained from the Australian Karting Association by virtue of winning the 2010 title, I’m very thankful to have the support of Garry Holt and the team at Eastern Creek Karts. I’ll be going into the event knowing that I couldn’t be better prepared and supported for it.”

Fothergill will fly out to Japan in two weeks time ahead of practice on Thursday November 10 and Friday November 11. Qualifying and the heat races will be held on Saturday November 12 ahead of the Pre-Final and Final on Sunday November 13.