V8 Supercars regular Jonathon Webb is taking a refreshing approach to the international co-driver format in place for this weekend’s Armor All Gold Coast 600.

While some are viewing their imported colleagues as a liability to both their championship points standings and crash damage budgets, the Mother Energy Drinks backed driver says that having former Indianapolis 500 winner Gil de Ferran on-board is an opportunity to move his small team forward.

Having moved away from the comfort of the Dick Johnson Racing stable for this season, Webb currently sits 22nd in the series standings – nine places shy of where he finished his rookie campaign last year.

“Gil has never driven anything like this – nothing with a roof or a windscreen, so he has a fresh perspective on it and no preconceived ideas,” Webb told Speedcafe.com. 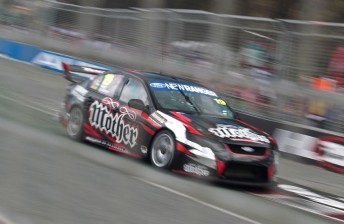 “He has done a lot of great things in his career, and spent a lot of time developing race cars. He’s got some good input on what he thinks can help us out to try and fix the problems that we know we’ve had and we’re trying to chase.

“He made a few changes to the car during practice, if nothing else just to see what it does. He had an idea of what he wanted to do, and some of his ideas worked and some didn’t.

“Last year it was good having Steven (Johnson) and James (Courtney) helping me along a bit, but this year has been sort of tough on my own. I’m still a junior driver, and I’m doing it by myself. From the day he (de Ferran) got here I’ve been learning a lot.”

Now 43 years old and retired from full-time driving, de Ferran raced on the streets of Surfers Paradise seven times during his career as a CART driver.

The two-time CART Series Champion says he didn’t think twice about accepting a late offer to replace Lucas di Grassi in Webb’s team when his fellow Brazilian was called up to test for the Peugeot sportscar program.

“I’m really enjoying working with Jonathon and being back in Australia,” de Ferran told Speedcafe.com.

“Bruce (Jenkins), the team manager here, has been a good friend for over 20 years, so when he said ‘hey mate, how do you fancy it?’, I said ‘why not’.

“It’s been difficult to get myself back in shape. I only had three weeks to prepare, but it’s been fun. I love Surfers, I love this event, and frankly I love Australia.

“I’m a retired racing driver these days, so this is like having a weekend off from retirement!”