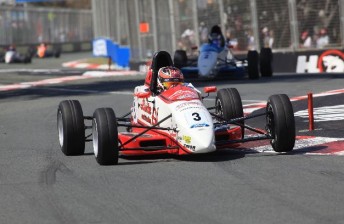 Cameron Waters has proven that his appearance in the recent Supercheap Auto Bathurst 1000 won’t hurt his chances in the Australian Formula Ford Championship, taking pole position today at Surfers Paradise.

The 17-year-old set an early benchmark time of 1:16.16s that was never bettered during the 20 minute qualifying session.

It’s Waters’ fifth pole position of the season and puts him in an ideal position ahead of races one and two tomorrow at the Gold Coast Street Circuit.

“The car felt great throughout the whole session and I was able to go quicker and quicker. In the end I brushed the wall going for a faster lap and needed to stop, but the damage in minor and won’t affect me tomorrow,” said Waters.

“My quick lap was pretty full on, but you have to be fully committed to put in a quick lap around here, it really is a fine line between a clean lap and touching the wall. I feel like I have a really good race car, so I’m looking forward to the weekend, it has to be good over the kerbs and mine is, so I think we’re in a good spot.

“I can wrap up the championship this weekend if I have a good result, so I’m focused on trying to make that happen, then I can head to the final round in Tasmania with the pressure off.”

His Sonic Motor Racing Services team-mate Jacobson jumped up to second in the dying minutes with a committed lap, but couldn’t do anything about Waters.

“The track conditions changed a lot following the V8 session and there was a lot more grip than I was expecting. To begin with I wasn’t using the car to its full potential, but the red flag period gave me an opportunity to talk to the guys on the radio and to calm myself down,” Jacobson said.

“When the session went green again I was in a much better frame of mind and I really feel like I got the most out of the car and myself. I needed to prove myself in a pressure situation and I did that today. It was a good day for the team as well with Cameron taking pole position so all in all I’m very happy.”

Spectrum pilot Sager secured his best starting position of the season with third and was clearly delighted to be back at the pointy end.

“We had a really strong test last week and that’s definitely helping this weekend, as a team we have traditionally been quick on street circuits and that’s showing up here on the Gold Coast. My lap was reasonably good, nice and clean and very committed, which is what it takes to be quick around here, I just can’t wait to race tomorrow.”

Trent Harrison will start fourth in his Mygale ahead of Nick Foster and Jack Le Brocq, while Tom Williamson, local driver Shae Davies, Mathew Hart and Sam Power rounded out the top 10.

Earlier in the day Foster topped the only practice sessions ahead of Jacobson and Waters.

Round 7 of the championship continues with Races 1 and 2 tomorrow at the Armor All Gold Coast 600.