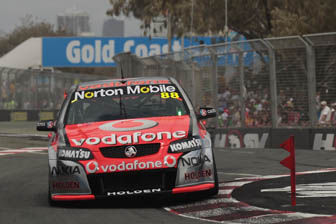 Jamie Whincup/Sebastien Bourdais at the Armor All Gold Coast 600

V8 Supercars believes it has resolved the kerb hopping issue that plagued practice at the Armor All Gold Coast 600 today.

With the traditional tyre bundles having been replaced by an electronic sensor and bollard system this year, practice saw drivers frequently losing their times due to being adjudged to have jumped chicanes.

CLICK HERE for Speedcafe.com’s initial report on the kerb sensor issue at the Gold Coast.

Having already removed the sensor at Turn 7 this morning, a post-practice meeting has seen V8 Supercars withdraw the Turn 8 sensor, while also reducing the sensitivity of the Turn 2 sensor.

Ford Performance Racing’s team principal Tim Edwards says that the outcome to the problem was sort quickly and efficiently.

“The whole bollard, transponder thing is a learning curve for all of us, but it has all been resolved and we’re heading in the right direction,” Edwards told Speedcafe.com.

“Removing the old tyres from the middle of those chicanes (from previous years) was the right call, but this new technology takes some tweaking.

“At the start of the weekend, we had four sensors on the back chicane. They took the first one away after the first practice, and now they’ve removed the second one. That should make it much, much better, and the drivers should be able to flow the cars through there better.

“Everyone has learnt throughout today, they took on the feedback and the drivers are happy with the way it was handled.”

The #88 TeamVodafone Commodore of Jamie Whincup/Sebastien Bourdais ended the day at the top of the times. CLICK HERE for Speedcafe.com’s Practice 4 report.

See below for Speedcafe.com’s V8 Race Guide for the Armor All Gold Coast 600.