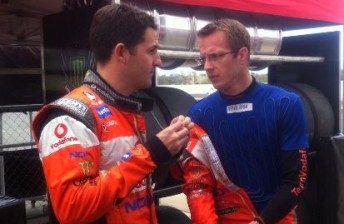 TeamVodafone imports Sebastien Bourdais and Andy Priaulx have dominated the opening co-drivers only practice session for the Armor All Gold Coast 600.

Bourdais and Priaulx swapped the top time throughout the 40 minutes, with the Frenchman putting down a best of 1:13.04s with five minutes remaining to be 0.33s faster than the Briton.

Bourdais was characteristically precise around the Surfers Paradise Street Circuit, recording just one kerb hopping infringement compared to 11 for his team-mate.

Australian Ryan Briscoe was third fastest with a 1:13.55s effort – the Penske Racing IndyCar driver hustling the #2 Toll Holden Racing Team hard in a session that included a visit down the Turn 11 escape road.

Gavin briefly displaced the TeamVodafone cars at the top of the times at the midway point of the session before the pace increased in the closing stages.

The Turn 14 hairpin leading onto the front-straight proved the most troublesome for the internationals, with Richard Lyons (Orrcon Steel FPR) the first to nose into the outside tyre wall after just six minutes had been run.

Tonio Liuzzi, the only current Formula One driver in the field, ended the 40 minutes at the foot of the time sheets after a difficult session that included brushing a tyre wall with the right-front corner of the Wilson Security Racing Falcon during his first flying lap.

Practice 2 got underway a full 35 minutes after its scheduled 1135 start time following a crash by Jeremy Gray in Carrera Cup practice at the Turn 6/7/8/9/10 chicane that required a concrete block to be replaced.