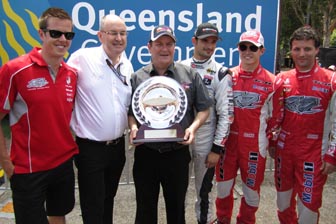 The Dan Wheldon Memorial Trophy has been unveiled in the Armor All Gold Coast 600 pit lane this morning.

Queensland sports minister Phil Reeves and V8 Supercars chairman Tony Cochrane took the covers off the perpetual trophy that will be awarded to the international driver who scores the most points across the two 300km races.

Minister Reeves says that the naming of the trophy was the least the event could do for Wheldon, who was killed in an IndyCar crash at Las Vegas.

“This is a fitting tribute that from this year onwards that the international driver trophy will be known as the Dan Wheldon Trophy,” Reeves said.

“I know a lot of drivers will be honouring in their drive this weekend, and there’s no doubt that this trophy is a fitting tribute.

“We send all of our thoughts and preys to Dan and his friends and family.

“From what the drivers have said to me, the best way to honour Dan is not only the trophy, but to go out there, have a great race and enjoy the weekend.”

Each V8 Supercar will also have a tribute on each door. CLICK HERE for Speedcafe.com’s earlier story.