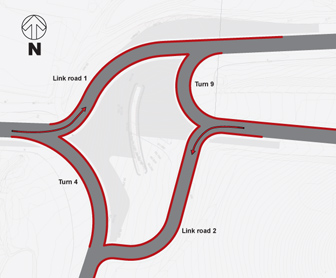 The NSW Motor Race Championships will run on the new ‘north circuit’ at Eastern Creek Raceway, with six separate categories set to compete.

The Eastern Creek north circuit is a 2.8km racetrack incorporating the northern half on the existing circuit – cutting the standard 3.9km layout in half.

This has been achieved via a freshly laid ‘link road’ cutting across the infield between turns four and nine.

This link road creates a new circuit, with a couple of tight, technical sections, including hairpin bends and blind crests.

“Since Oran Park closed in early 2010, Sydney has had an acute shortage of racetrack availability, with Eastern Creek at full capacity,” said Matthews.

“The changes we are making to the circuit will meet the demand from the motor racing public and give more track time to the masses.”

The link road is the first stage of a complete circuit redevelopment that will see the track having the potential to run in four separate layouts.

“We’re moving forward with the biggest redevelopment the racetrack has ever seen,” he said.

“Holding the first race meeting on the new north circuit is an exciting moment for all of us here, and for the meeting to be a NSW State Championship event is even better.”