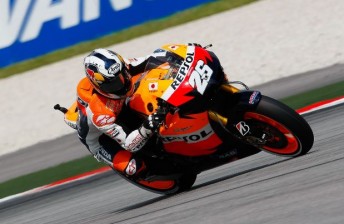 Dani Pedrosa has led a Honda domination of the opening day of practice for the Malaysian Grand Prix.

Pedrosa’s best effort of 2:01.25s was a full 0.82s faster than the newly crowned World Champion Casey Stoner, while Andrea Dovizioso was a further 0.59s adrift in third.

Gresini duo Marco Simoncelli and Hiroshi Aoyama rounded out the top five, while Colin Edwards was best of the rest on his Tech 3 Yamaha in sixth.