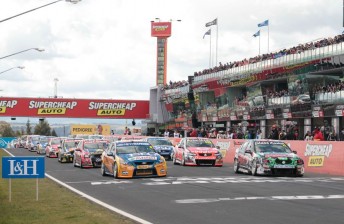 V8 Supercars’ two Car of the Future prototypes will meet each other on-track for the first time next week following the completion of the new generation Holden Commodore VE racer.

The Holden was shaken down at Queensland Raceway yesterday, and will now travel to Eastern Creek for its first back-to-back performance testing against the previously constructed Ford Falcon FG prototype.

While the two cars were initially being built simultaneously, the Holden has had its maiden on-track appearance almost four months after the Ford following a decision to focus on finishing one car when the move to a transaxle gearbox required some significant chassis alterations.

Crucially, the arrival of the COTF’s 18-inch wheels into Australia is also slated for next Tuesday, allowing the tyre development program – which will be led by Mark Skaife – to kick off at Phillip Island on November 8.

Tyre testing will then head to Winton later in the month in what V8 Supercars motorsport manager Adam Perry describes as the beginning of Phase 2 of the COTF’s on-track running.

“The Eastern Creek test will simply allow us to benchmark the cars in terms of performance and set-up,” Perry explained to Speedcafe.com

“We know what a lap time should be around there in these cars, and we’ll make sure we can get close to those on good 17-inch tyres.

“Phase 2 is really about putting some main series drivers in for the following tyre testing. They’ll take over the program from (Fujitsu Series drivers) Jack (Perkins) and Scott (McLaughlin).

“Mark will head up the tyre testing. He’s one of the few drivers that has experience in the current cars and has done tyre testing before.

“He’s the best person to do it as far as we’re concerned and with some of the main series drivers that are in the cars week-in-week-out benchmarking against him, that’s the best way we can get a good tyre result.”

The tyre testing undertaken this year will be done using the two existing compounds transferred onto an 18-inch rim size, with new compounds then expected to be trialled in the new year.

Open-air aerodynamic testing of the two prototypes will also be undertaken in early 2012. While the aero packages are expected to be little different to those seen currently, additional design work is being undertaken around the diffuser area of the cars, with the goal of providing equality between the marques while maintaining the visual cues of their production counterparts.

See below for Speedcafe.com’s Amror All Gold Coast 600 Race Guide