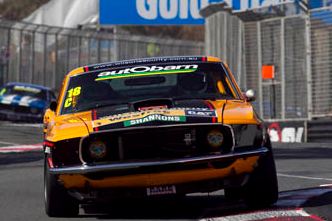 John Bowe on his way to victory in Race 1

John Bowe has taken first blood on the streets of Surfers Paradise, winning Race 1 of the Touring Car Masters.

Bowe started the race from pole and led every lap. The only box the two-time Bathurst 1000 winner didn’t tick was the race’s fastest lap. That honour went to Richards.

In the championship stakes, leader Andrew Miedecke had a horror run, completing just one lap before succumbing to a mechanical problem.

Two more Touring Car Masters races will be held over the Armor All Gold Coast 600 weekend.

In the Auto One V8 Utes, championship men Ryal Harris and Chris Pither have locked out the front-row of the grid for tomorrow’s first race.

For a full guide to track activities over the Armor All Gold Coast 600, see below for Speedcafe.com’s V8 Race Guide.