Alan Heaphy is one of Australia's most admired team managers

Alan Heaphy has been involved in motor sport for well over three decades.

With experience in V8 Supercars, the Australian and British Touring Car Championships, European Sportscars and Rally to name a few, he has enjoyed success at home and abroad and is respected by everyone in the industry.

Heaphy has quite a CV, he worked alongside the late Howard Marsden, helping to bring Nissan’s successful racing program to life, he enjoyed Bathurst and championship wins, he worked with Jim Richards, Mark Skaife, Wayne Gardner and Craig Lowndes (to name a few), he was the team manager at 00Motorsport and has run Mitsubishi’s well known Ralliart team.

Heaphy’s interest in motor sport started from a very early age, he owned his first car at the age of nine, got his first road car while still on his L plates and got his first job in the sport in 1981.

“I was offered a job full time to do a motor sport programme, which was Rallying actually, building some cars,” Alan Heaphy explained to Speedcafe.com

“This eventually took me away to the UK where I set up an operation to run a car for a guy here in Australia in the UK Rally Championship.” 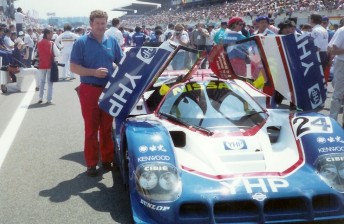 Alan Heaphy with the Nissan that secured pole at the Le Mans 24-Hour race in 1990.

It was during this series that Heaphy met the late Howard Marsden, who was setting up a racing programme for Nissan in Europe.

“I went to work for Nissan which I did for seven or eight years,” said Heaphy.

“Howard and I did the European Touring Car Championship with Nissan which then took me into the Sportscar programme. We ran the Le Mans spec prototype group C cars which we ran at Le Mans, Mexico, Canada … all over the world.

“That went for several years then that programme got decommissioned.”

After this, Marsden decided to send Heaphy back to Australia to run the Nissan programme with Gibson Motorsport.

“The brief was to win Bathurst,” said Heaphy.

“We wanted to be the first Japanese manufacturer to win at Bathurst.

“The GTR was quite a complex car. I’d had a lot of experience in PI – data logging equipment – which we plonked onto the GTR and accelerated the development turning them into the winning cars that they were. “We won Bathurst and a couple of championships, the Nissan was a very, very good race car.”

Heaphy had nothing but utmost respect for Marsden, and credits him with getting him into motorsport management.

“If there ever was a bloke that opened some opportunity doors for me, then he was it.

“I was basically a mechanic in the UK; he picked me up and said OK we have to set this (Nissan) thing up. We set everything and he elevated me into a management position, which I didn’t think I could do, but he did. From that point I never looked backed.”

Heaphy loved working on the Nissan GTR programme in Australia; he was excited by their development and the success that came their way.

“I was brought out to Australia by Nissan to change things technically,” said Heaphy.

“It was my job to make it more efficient and get better results with the cars.

“I was fortunate that I had some very good engineering experience, but the level of ingenuity in the team at the time was just extraordinary, they were developing things that were light years ahead of the manufacturers, things like turbo charges.

“The ability in the team was just amazing, that car got more and more reliable and faster.

“There was no opposition for them, they were fantastic times.” 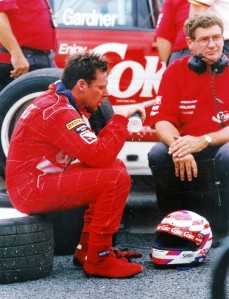 Alan Heaphy with Wayne Gardner during the Coca-Cola days

“We set up a good team and lifted the benchmark in presentation by a country mile.

“We had limited success; the biggest issue was the tyres, if you don’t have Bridgestone you weren’t in the race. We were stuck with customer Dunlops and couldn’t compete.

“(Neil) Crompton was a reasonably good driver, as was Wayne, but he got into a bit of trouble, it was just the way he drove the car.”

Looking back, Heaphy was disappointed that Coca-Cola pulled the pin on the race team, but understood that everything goes in cycles.

“It was a shame, but it’s like most things, they spent their money, did their thing and moved on to other things,” said Heaphy.

“Wayne had a good run out of Coca-Cola, but you’ve got to work with these people.”

While Heaphy was on the TEGA board with Mark Skaife, Glenn Seton and Wayne Cattach, he also offered his services to several other teams (including CAT) and worked with Fred Gibson on and off for many years.

Together with Gibson, they started Wynns Racing which morphed into Kmart Racing and then got the call up to run 00Motorsport, which didn’t stand the test of time.

“It was a real pity that (00Motorsport) went the way it went,” said Heaphy. Craig Lowndes smoking the tyres of his 00Motorsport Ford Falcon

“There were personality clashes above me that didn’t work, there were financial issues and I had no control over the situation.

“The drivers involved had management that were looking for bigger and better things as well.

“It started off pretty well; we had Craig Lowndes and Ford. We did the stats at the end of the first year, we were the second best Ford team behind SBR and in the second year, the year of the BA, we were going OK.

“Then Lowndes moved to FPR and that left us with an owner that did not want to spend money, his son was driving, it just got too difficult.

“Basically they decided to shut it down.

“It was very disappointing. It’s very hard to tell 20 or 30 very loyal people that they didn’t have a job any more, that was the hardest part.

“After that I’d had enough of V8 Supercars and moved on.”

On leaving the V8 paddock, Heaphy has been working with Team Mitsubishi Ralliart where they run the Rally programme and have secondary manufacturer rights to develop enhancements to several of the cars in the Mitsubishi range.

“We build a multitude of evolution nine and ten Lancers which are involved in tarmac rallying, circuit racing and club events,” said Heaphy.

“We’ve developed a service facility and a motor sport facility and the last two years we’ve won the Australian Manufacturers’ championship for production cars – with the Evo 10.

“We’ve got one round to go and we could win it for a third time.” Having won three Bathursts (in V8s/Group A), two Bathurst 12-hour titles in Production Cars and countless podiums in the British Touring Car Championship and Sportscar World Championships, his favourite memory comes from the Le Mans 24-Hour race in 1990.

“I think the highlight was having pole position in the 24 hour race by six seconds,” said Heaphy.

“I mean, that was the highlight of my career created out of a mechanical failure. I remember it so vividly; I couldn’t believe the thing as it came past the pits.

“The Japanese had telemetry going, they were yelling out ‘we’ve got a problem’ and I couldn’t contact the driver, then low and behold he goes past the start/finish line in qualifying and we were six seconds quicker than anyone else on the circuit. Everybody else just gave up.

“I guess the next best was Bathurst in 1991 when we got pole, the lap record and won the race. That race time, which was six hours 20 odd minutes, was only beaten last year by Skaife and Lowndes.”

Heaphy is still a big fan of V8 Supercars and watches them each weekend.

“I think from where the sport has evolved from, it’s absolutely fantastic,” said Heaphy.

“I was watching Bathurst and the way it’s presented, with the teams and the drivers all lined up for presentation, is so professional.

“The racing itself is closer than it’s ever been before, it’s a great thing.

“It’s just a pity that it comes so expensive to do. Eventually that’s what brings things down, but at the moment it’s strong, it has good support and it’s entertaining.”

Ahead of this weekend’s ArmorAll Gold Coast 600, Heaphy is also a fan of the inclusion of international drivers.

“I think it’s fantastic; all the work that V8s have done over the last 10 years has given them a strong international presence,” said Heaphy.

“Drivers from all over the world would give their right arm to come over and do a couple of events, particularly Bathurst.

“I think it’s a great combination and gives it the international flavour and mix, and makes people from around the world want to watch it because they can follow their favourite drivers.”

One of Alan Heaphy’s favourite memories, winning Bathurst in 1991, which came with pole and the race lap record