Darren Turner and James Courtney with the window, paying tribute to the late Dan Wheldon

Dan Wheldon may have left this world before his scheduled V8 Supercars debut, but his name will still be seen around the Gold Coast street track.

Wheldon’s name will be run on the window of the #1 Toll Holden Racing Team Commodore VE, alongside James Courtney and Wheldon’s replacement Darren Turner.

The HRT cars will also run ‘For Dan’ stickers on the right-hand top corner of their windscreens.

Wheldon, 33, was tragically killed in an IndyCar accident on Monday and was meant to partner Courtney.

Turner was one of many British Racing Driver’s Club members to pay tribute to Wheldon this morning in the Surfers Paradise pit lane.

The Aston Martin GT Championship driver says that he wants to do a good job for Wheldon this weekend. 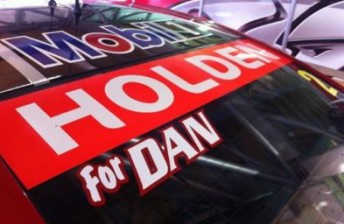 The windscreen of the #2 HRT Commodore

“It’s a strange feeling to be filling in for him this weekend,” Turner said.

“The main priority is to do a good job for Dan.

“For me, it’s an honour to be involved with the team. I’ll try and do the best job I can for them, knowing it’s a championship race, but it will be a completely different feeling. I’m driving in the place of someone who should be down here.

“It’s a race feeling I’ve never experienced before and I hope I never have to again.”

CLICK HERE for Speedcafe.com’s full story on the BRDC’s tribute to Wheldon.

In another tribute to Wheldon, the international driver who scores the most points over the two 300km races this weekend will win the newly-named Dan Wheldon Trophy.