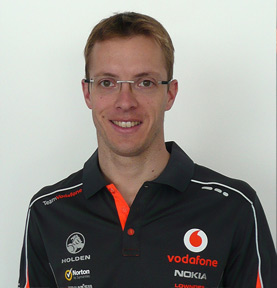 The Frenchman will drive for TeamVodafone alongside Jamie Whincup this weekend – enjoying his first taste of the team’s VE Commodores at Queensland Raceway’s pre-event test.

Speedcafe.com’s Stefan Bartholomaeus spoke to him.

SPEEDCAFE: Sebastien, how was your first day as a TeamVodafone driver? Everybody was talking about tyres, but you seemed to be going pretty quickly…

SEBASTIEN BOURDAIS: We had two decent sets, so it was good to get a feel for the car in these (high grip) conditions. It felt pretty good, so I’m fairly confident. I did two long runs on them, and I like the car like that – you need to nurse the tyres a little bit and not drive too hard, but if you do that they’re fairly consistent and it’s very enjoyable.

In the morning we started on the hard tyre which was ok for rediscovering the car, but we didn’t do too many laps because we were running out of sets. But I was pretty happy with the way the car was handling, so it was a good day.

SPEEDCAFE: I guess a big part of it would have been to have everything come back to you from last year.

BOURDAIS: For sure it (racing here last year) meant I could get comfortable fairly quickly and just focus on how the different tyres behave. The team is obviously very well organised and have their stuff together, so it’s always nice to work in these conditions.

SPEEDCAFE: It’d be fair to say you have different expectations this year, not only coming back for the second time, but being with the benchmark team as well.

BOURDAIS: Yes. Obviously when I was with Jonathon, he was in his rookie season and it was very different. We started both races I think 23rd and 19th or something like that, so obviously expectations cannot be too high. This year obviously with a team like this and having Jamie qualifying the car, we should be starting a lot higher up, so it will be very different. 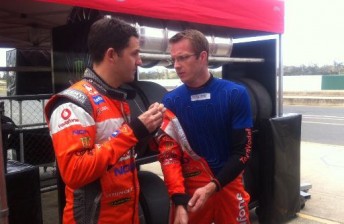 Whincup and Bourdais at Queensland Raceway

SPEEDCAFE: Of course, being with this team also means you’ll be part of the championship battle between Jamie and Craig…

It is something to think about, but you know, you just hope nothing bad will happen and the car will stay in shape. Hopefully we’ll hand it to Jamie in a good spot and get a good result.

SPEEDCAFE: We’ve seen you drive a lot of downforce cars over the years, whether they be Champ Cars, IndyCars or prototype sportscars. Is it a refreshing challenge to actually have to wheel these cars around?

BOURDAIS: I have a little bit of GT experience in the Porsche Cup in France, so I’ve got a little bit of experience but not much. I’ve driven a GT2 Porsche at Le Mans, and a Daytona Prototype as well which doesn’t have much downforce, but they’re much lighter cars.

Every car is different, and you’ve got to re-learn a bit every time you jump in a different car. But I do enjoy the challenge, to try to jump into another car and try and extract the most that you can out of it. Obviously trying to match these guys isn’t easy, but we will do our best.

SPEEDCAFE: If your schedules align and the format continues, is this an event you’d like to make a regular part of your year?

BOURDAIS: Yeah, it’s a lot of fun and they’re great cars to come and race. Everybody is very excited about the event, there is a big crowd and the general atmosphere around the event is very nice, so it’s always good to come back.

SPEEDCAFE: You’ve had part-season programs in IndyCar and Le Mans sportscars this year, what can you tell us about 2012?

BOURDAIS It’s very much up in the air. I don’t know what Peugeot wants to do, it’s a little complicated there. I’m sure they want to continue, but it’s a little difficult to sign an agreement right now. I’m trying to put something together full-time in IndyCar, so there are a couple of options which are probably not going to be a compromise like this year mixing the two. But it’s probably going to be a tough decision so we’ll see how it shakes out.