Q&A: Boris Said on V8s and the USA

Q&A: Boris Said on V8s and the USA 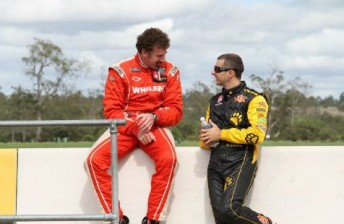 Boris Said is one of America’s most well known road racers, competing in the GT Class of the Grand Am series in between NASCAR road course duties.

Having raced at Paul Morris Motorsport alongside fellow import Matt Neal in the 2008 V8 Supercars endurance races, the 49-year-old returns to Australian shores this weekend, again linking up with the Queensland based Holden team for the Armor All Gold Coast 600.

SPEEDCAFE: It’s been three years since you were out here racing with PMM at Phillip Island and Bathurst. The cars have moved on a fair bit since then, especially in this team, but it must help having raced the cars before.

BORIS SAID: I’ve raced so many different cars since then, so it’s hard to compare, but I certainly feel more comfortable than the last time I came here. They’re just difficult cars to drive. These guys drive them every week and they’re amongst the best in the business in my opinion.

It’s humbling when you get in these things and go up against those guys, but it’s a blast to do. Having 28 international guys makes it a little more even, so we’ve just got to measure ourselves against each other.

SPEEDCAFE: It doesn’t matter which championship you look at around the world, it’s very hard to come in and be competitive with the regulars. That said, you often jump into the road course races in NASCAR’s Cup and Nationwide Series, and took a win last year in Canada. How does the level of road course competition over there compare with V8 Supercars?

SAID: It’s funny you say that because when I came back after Phillip Island and Bathurst, I said that it’s exactly like NASCAR in terms of how professional it is and the level of competition. There’s no other road racing series in the world where it’s this competitive.

They are so many cars so close together, so many teams that are well funded and they put on a great show. It’s amazing. In the States, any road racing series that you go to, you can count four or five drivers that are capable of winning, and here it’s just like NASCAR where there are some super teams, but after that it’s really really competitive.

SPEEDCAFE: I’m sure you’re aware of the plans to run a V8 Supercars event in Texas in 2013. The format hasn’t been confirmed at this point, but are you keen to be involved in some way?

SAID: Oh yeah. I think for it to get popular in America, this format would be fantastic. I’m sure the regulars aren’t happy with it, because we’re really putting their championship in jeopardy, which is something that I don’t feel great about. I don’t want to crash and hurt anybody’s chances. But I think it’s a really fun way of doing it and I think it’d be an awesome format to bring to America.

SPEEDCAFE: Do you think the American public can get behind the event if it includes an American element?

SAID: Definitely. A key thing now as well is that Speed is carrying the races on TV. I mean Bathurst was seven hours live, it was great coverage, and a lot of people saw that who didn’t understand V8 Supercars before. It’s such great racing.

SPEEDCAFE: This Gold Coast event is a good opportunity to come and race these cars, but are you looking at doing the Phillip Island and Bathurst double again in the near future?

SAID: I certainly hope so. When I was watching Bathurst I was really itching to be there. This year I was busy racing during the Phillip Island event, so it was never going to happen. But hopefully next year the schedules will be different.