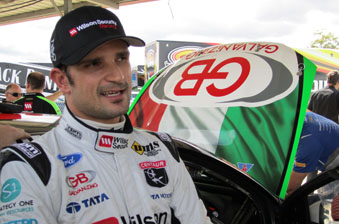 V8 Supercars is a world away from the Formula One, but V8 debutant Vitantonio Liuzzi is not underestimating the challenge of driving Australia’s homegrown race cars this weekend.

The Formula One star will make his maiden start in a V8 Supercar at the Armor All Gold Coast 600, partnering Tony D’Alberto in the #3 Wilson Security Racing Ford Falcon.

In an exclusive video interview with Speedcafe.com, Liuzzi says that he is not underestimating the tough task he faces.

“It won’t be easy for sure, because Surfers seems like a really difficult track, but I’m really looking forward to this challenge,” he told Speedcafe.com.

After his initial test at Queensland Raceway on Wednesday, Liuzzi understands that the Surfers Paradise track will offer him a completely new challenge.

“You can not make any mistakes, and I think that will make the race winner,” he said.

“You have to be away from the walls and be as fast as you can.”

Speaking to Speedcafe.com, Liuzzi speaks about his V8 Supercars debut this weekend, the Queensland Raceway test plus his season in Formula One with HRT F1 and his own range of clothing designs …