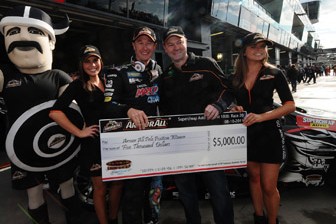 Naming-rights sponsor Armor All will offer more money for pole position at the Armor All Gold Coast 600 this weekend.

An additional $10,000 has been put up for any driver that can set the pole position for both Saturday and Sunday’s races in the Armor All Super Pole Challenge.

The international car care giant already awards $2,500 for the Armor All Pole Award, but has stepped it up for the Gold Coast event offering $5,000 for each day – plus the $10,000 bonus.

“The Armor All Gold Coast 600 has taken a huge step forward this year and we want to take another step with the event through the Armor All Super Pole Challenge,” said General Manager of Armor All, Paul Blair.

“If a driver combination can grab pole position for both the Saturday and Sunday race on the Gold Coast, they will receive an additional $10,000 – meaning $20,000 to be shared between the drivers and team.

“The Armor All Super Pole Challenge is for this weekend only. We have 28 outstanding international drivers, just taking a walk along pitlane and seeing the who’s who of world motorsport is testament to V8 Supercars and this event.

“Our head office in New York is incredibly excited about this weekend and the fact that the Armor All Gold Coast 600 will be beamed live into the USA on the SPEED Network.

“To see the images of the Gold Coast – along with some of the drivers they know well from world motorsport teaming up with the V8 Supercars heroes – in primetime – has everyone eagerly awaiting the weekend.

“We hope that dangling that extra carrot in front of the drivers will spur them on to push that little bit extra during Qualifying – guaranteeing an exciting session for the fans at the track and at home.”

The drivers will compete in a 30 minute qualifying on Saturday before a Top 10 Shootout will determine the Armor All Pole Award Winner. An all-in 30 minute session will open hostilities on Sunday morning.

If a driver can nab both Saturday and Sunday’s $5,000 Armor All Pole Awards, they will be presented with an additional $10,000, courtesy of Armor All.

See below for Speedcafe.com’s preview to the Armor All Gold Coast 600.