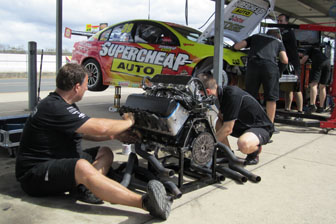 The V8 Supercars test is underway at Queensland Raceway, giving V8 Supercars’ international guests a chance to sample the unique V8s before hitting the Surfers Paradise street circuit on Friday.

After just one hour of testing, mechanical problems have already struck some teams. The Russell Ingall/Jan Magnussen Supercheap Auto Commodore VE has had an engine issue, forcing the team to change powerplants. Team owner Paul Morris expects the problem to cost the car an hour of on-track time.

Formula One driver Vitantonio Liuzzi’s first laps in a V8 Supercar were also short-lived after a power steering belt flipped off the #3 Wilson Security Racing Falcon that he will share with Tony D’Alberto. The issue has only cost the team 30 minutes of on-track time.

The damaged #17 Dick Johnson Racing Falcon that caught fire at Bathurst less tahn two weeks ago has arrived at ‘The Paperclip’ in as good as new condition. In fact, team manager Malcolm Swetnam says the car is even better than it was prior to the accident … 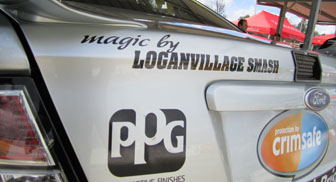 DJR has paid tribute to its chassis repairer

“I think it’s actually better than it was before,” Swetnam told Speedcafe.com at Queensland Raceway.

“Sometimes when you put them on the chassis jig, you find something and I reckon it’s the best it has ever been.”

To honour the reconstruction of the Jim Beam Black Falcon, the DJR team has run a special note to the Logan Village Smash on the boot of its car (see image).

The #17 Falcon will be driven this weekend by regular driver Steve Johnson and German BMW driver Dirk Muller.

Stick with Speedcafe.com for all the latest from Queensland Raceway’s V8 test today.