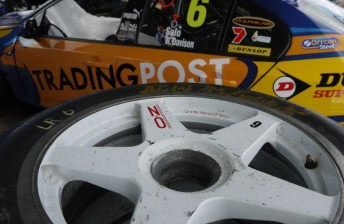 Old tyres are the order of the day at QR

The introduction of Dunlop’s soft compound tyre to the Armor All Gold Coast 600 this year will increase the difficulty level for the international co-drivers, says Ford Performance Racing technical director Campbell Little.

While the 28 internationals will take part in a pre-event familiarisation test today at Queensland Raceway, no new tyres have been issued by V8 Supercars for the extra running.

Each team will instead be forced to make do with their existing bank of used tyres, or run one of the 10 new sets they are allocated for this weekend’s event.

“It’s quite unfair to bring these guys halfway around the world and not give them decent tyres to practice on,” Little told Speedcafe.com.

“It’s all very well to allow us to use a set of our race tyres (at the test), but when you think that we’ve got two 300km races to do, and typically 70km is the useful sort of distance teams can get out of a soft tyre, that means we should be using four sets in each race.

“We only get 10 sets for the weekend, so to suggest we should use one of those at the test day… it doesn’t look like there’s been a lot of thought put into it.”

The opening day of running at the Surfers Paradise Street Circuit on Friday will see four 40 minute practice sessions run, with all drivers permitted to take part in Practice 1 and 4, and co-drivers only in Practice 2 and 3.

According to Little, the need to manage the race allocation throughout the entire weekend may see even the official practice time under-utilised.

“If you use your tyres up in practice you might not have much to race on, but if you conserve your tyres for the races and don’t give your driver enough miles he might make a mistake.

“Expecting these internationals to go out and start the races on new tyres without having had any quality practice time on them is quite unfair.”