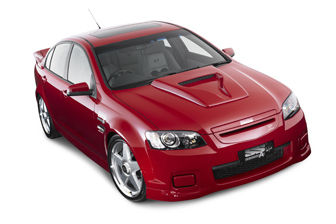 The latest offering from HDT

HDT boss Peter Champion ‘unveiled’ the VL/VE Retro Group A SS Plus Pack with a ‘flying lap’ past the pits at Eastern Creek which was met with much applause by the 80+ special guests at the private launch.

“It certainly is a very special day for us at HDT to see the last of the Heritage series cars released to the public at last,” says Champion.

“We started this series some 4 years ago and with the release of the VL Retro we have finally completed it”.

The development of this model has takes on styling cues of the original, including the body kit, original ‘scheel-styled’ interior, plus the production of our own Momo-inspired 20 inch 5 Star wheels.

The VL/VE Retro Group A Plus Pack has continued another interesting feature of the original VL and features an Energy Polariser.

Racing Legend, and HDT founder, Peter Brock, insisted that only the ‘Plus Pack’ models would carry his signature and amongst other exclusive features they were all fitted with an infamous Energy Polarizer.

While the debate has already started over the validity of the Polarizer technology, for Champion, it was a given that the Plus Pack would have one fitted.

“This is akin to a piece of Brocks’ DNA on this car, Peter felt very strongly about the Polarizer and we could not produce a Heritage car and not fit it,” he said.

Special Guests Bev and Robert Brock were there to see the car that carries Peter Brock signature revealed to the public and are very happy to be involved with HDT and the last of the Heritage series vehicles.

The VL/VE Retro Group A Plus Pack goes on sale today and is a truly bespoke vehicle. HDT custom build your vehicle from the base package and the sky is the limit when it comes to performance.

Along with HDT Supercharger, HDT High-Performance Brake Package and new with the release of the VL Retro they also offer a HDT Track Pack to enable you to take your HDT trackside.

You can view a full gallery of pictures and specifications at our online showroom at www.hdt.com.au.