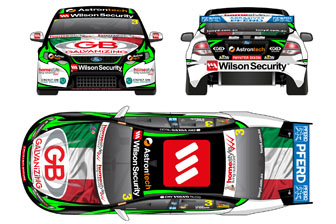 Wilson Security Racing will sport an Italian flavour on its Ford Falcon in the Armor All Gold Coast 600 this weekend.

The #3 entry, to be driven by regular steerer Tony D’Alberto and Formula One driver Vitantonio Liuzzi, will have an Italian flag on the bonnet and boot of the Ford.

the new scheme replaces the ‘pink’ livery it competed in at the last event at Bathurst, supporting the McGrath Foundation where D’Alberto and endurance co-driver Dale Wood scored a top 10 finish.

This weekend, Liuzzi steps into the co-driver role with D’Alberto where he will become the first current Formula One driver to compete in a modern V8 Supercars race. Liuzzi currently currently drives for Hispania.

The Italian flag representation comes from their backgrounds, with both D’Alberto and Liuzzi having Italian heritage. Also, the bonnet’s title sponsor GB Galvanizing is owned by Italians.

“I’m going to revert to my full first name this event – so we’ll have Antonio and Vitantonio driving the car,” D’Alberto told Speedcafe.com.

“We’re also going to have pasta for dinner and pizza for breakfast, but I don’t think we’ll run red wine in our drink bottle in the car!”

On a serious note, Liuzzi says that today’s test at Queensland Raceway will be vital to the team’s chances at the tough Surfers Paradise street circuit.

“Today is a very important day for me to familiarise with the car,” Liuzzi told Speedcafe.com.

Today’s Queensland Raceway test is designed to give all international drivers miles in the cars ahead of the Armor All Gold Coast 600.