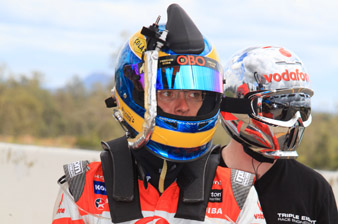 Sebastien Bourdais says that he feels stuck in the middle of a tight intra-team title fight ahead of the Armor All Gold Coast 600 this weekend.

The Frenchman will drive with Jamie Whincup in the #88 TeamVodafone Commodore VE, currently second in the V8 Supercars Championship points stands.

Whincup had led the championship from Race 1 in Abu Dhabi until an electrical fault at Bathurst allowed Lowndes (second at Bathurst) to take a 100 point title lead.

With the international driver format at the Gold Coast set to throw many balls in the air this weekend, Whincup’s team-mate Bourdais is feeling the intra-team heat.

“It’s a very different atmosphere and different build up, compared to last year,” said Bourdais, who made his V8 debut at this race last year with Jonathon Webb.

“Jamie is second in the championship fighting it out with Craig so we’re kind of in the middle of this which makes it more interesting.

“I’m looking forward to the weekend and hopefully we can bring some points home for the guys.”

At today’s international test at Queensland Raceway, Bourdais says he is enjoying being back in a V8 Supercar.

“The car is very much fun to drive, and this team has done a great job figuring out the car and how the tyres work.

“There’s a lot of things to learn in a short amount of time but overall, TeamVodafone has done a really good job to help me find my sweet spot.”